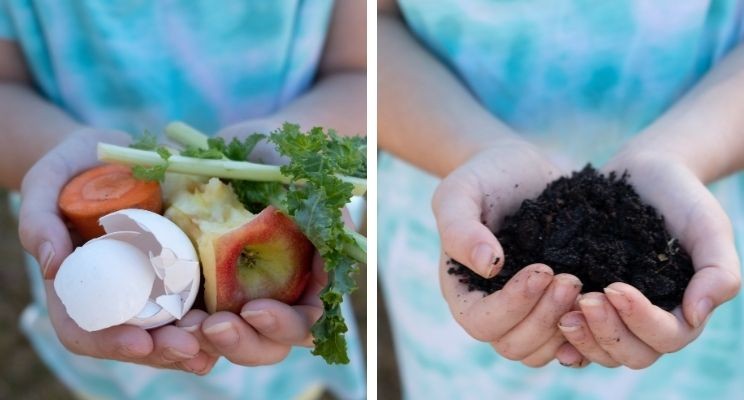 Sometime around the summer of last year I started to get really interested in what happens to stuff after we throw it away. Previously, I hadn’t given a second thought to my used and discarded items after they landed in the trash. I think it was probably reading Small is Beautiful that triggered me, and afterward I couldn’t stop seeing wasted excess everywhere around me. One day it was more convenient to throw away my muddy sneakers than clean them. The next I was like, “Why would anyone put this beautiful, useful banana peel in the trash?!” and, “I have an extra twist tie and two rubber bands; can anyone use these?”

I started thinking about how I acquire stuff; consume or use it; and then dispose of it. How many of my discarded goods wind up in landfills, or ditches, or highway exits, or oceans?

What Compost Can Teach Us

Some of my friends know that I am a backyard composter. Prior to this new habit of course everything went in the rubbish bin to be taken away to someplace where it becomes someone else’s concern.

Now I have a pail in my kitchen. When it’s full, I take it out to my tumbler where my apple cores, coffee grounds, empty paper towel rolls, and carrot tops join their brethren in a steamy stew of goodness. The soldier fly larvae, worms, lizards and frogs feast and are merry.

In a few months I have a beautiful, nutrient-rich humus, and my garden eats it right up. In the fall, I hope to harvest my broccoli, potatoes, and artichokes. My family will be nourished by their gifts. The parts that we can’t use go back in my pail, and the cycle continues. It is a perfect design.

Trash Wasn’t Part of the Plan

God didn’t make trash. To say it another way, nothing in creation was meant to be disposable. Moreover, nothing in creation is redundant. It all has a purpose. As David sang: “The earth is the Lord’s and everything in it.” Psalm 24:1. The Lord created light and dark, the land and sea, the plants and fishes, all the living creatures, and people.

On the 7th day, He could have created landfills, but in His wisdom, He rested instead.

Everything we have is a gift. Humans, with all of our vast intellect and complex scientific apparatus, cannot create anything new. Every piece of matter that exists on this green earth was there from the beginning.

We are just stewards with a choice: we can can care for it, or abuse it.

Everything has a purpose.

This applies to people too, of course.

In my professional life, I was fortunate to work for many years for a small business. My coworkers and I generally considered each other to be valuable humans.

At one point early in my career, my family experienced a significant crisis. I was unable to contribute at my normal level due to increased personal demands. My boss and coworkers stepped in, picked up the slack and supported me in my time of need. When things returned to a balance in my life, I was fiercely determined to give back to the organization that given to me. I hope I returned the value. And at various points, I was blessed to be able to support other co-workers in a similar way during their own times of hardship. It was a beautiful, imperfect cycle.

When the company was sold, I experienced what it was like when the cycle breaks. The new ownership did not know any of us by name or face or whether we had families or pets. And they excelled at maximizing efficiency, “leveraging” resources, and discarding what was no longer valuable.

They tossed the rubbish to be taken away someplace where it became someone else’s concern. From my perspective, it seemed that the value of people and things was calculated by the same formula. Tt was only by the grace of God that I was at a point in my life where I might pass the test and stay out of the rubbish bin. Regardless of whether I made the cut or not this time around, I realized that I was considered disposable.

Meanwhile, in the highest offices of government, I watched our commander-in-chief exploit individuals and resources and cast them aside when they ceased to be profitable. I thought, this behavior is unacceptable. If this is what is rewarded and considered successful, what will become of us?

Am I Any Different?

And I realized with horror that I was not on a very different path from what I had called unacceptable in others. I had liked to think I was generally a kind and compassionate person. But I knew I traded kindness and compassion for profit and convenience far more often than I wanted to admit.

If I Treat Little Things Carelessly, When Push Comes to Shove, Will I Treat Big Things Differently?

I regularly buy items for the cheaper price, throwing away an opportunity to use my purchases to help someone thrive. I mistreat things and then dispose of them when it’s inconvenient restore their value. When I negotiate a contract, my goal is to pay the least amount possible. I would happily accept a deal that was lopsided in my favor. I’ve dumped grease down my disposal, thinking my little bit won’t make a difference in the city slew. I tell an acquaintance whose car is in the shop, “good luck with that,” while mine sits idly in the garage. I’ve chosen to hurry past my elderly neighbor, throwing away a moment I could have used to celebrate and honor her value. Daily, I consume things that are produced by means of violence and destruction, and then I toss the empty container.

If I, as a consumer and citizen, act this way how can I expect businesses and governments to act differently.

Ignorance is Bliss, But It’s Expensive

It’s easy to consume thoughtlessly and discard the leftovers when I don’t see where my stuff comes from and where it goes when I’m done with it. And it’s easy to justify that my bit doesn’t matter in the big picture. Except it does. Every little bit matters. And nothing was created to be trash.

If things (and people) are treated respectfully and used according to their purpose at every point along their lifecycle, the system as designed works beautifully with no waste.

The pessimist in me wonders if it is possible to make radical, conscientious decisions without being taken advantage of. I think the answer is probably no. But as Mother Theresa said “do it anyway.”

Is it possible to actually live this way and still earn a living? I suspect it’s gonna take some faith. But my friend Matthew said, “Look at the birds of the air; they do not sow or reap or store away in barns, and yet your heavenly Father feeds them. Are you not much more valuable than they?”

So where do I go from here? I make a hundred poor and thoughtless decisions every day. I pray for forgiveness and grace to make one fewer today than I did yesterday.